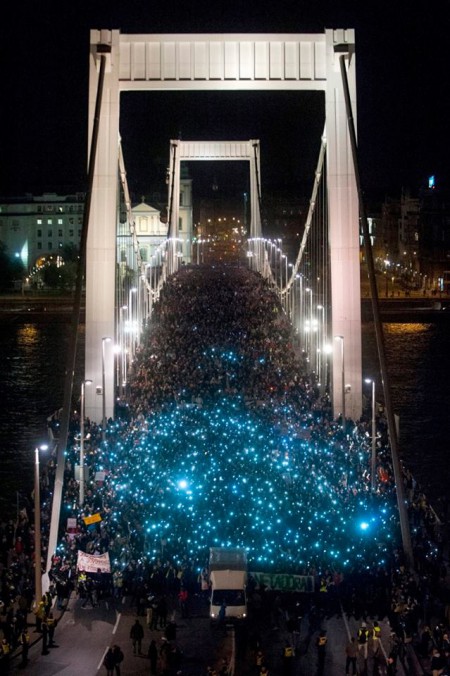 The Hungarian draft tax bill contains a provision for Internet providers to pay a tax of about €0.48 per gigabyte of data traffic. Although it would be possible for Internet providers to offset corporate income tax against the new levy, this measure would represent a major step backward in the digital agenda for Hungray, which is already under the EU average in all digital indicators.

Thousands for protesters gathered in front of the Economic Ministry on Sunday, in a rally launched by a Facebook group. At the end of a long day of protest, my friend Mizsei said that the Government seemed open to a change, but nothing has happened since then. That’s why yestarday there was a second turn of protest and EC vice-president for Digital Agenda, Neelie Kroes, took a strong position against the Hungarian tax bill, saying that  it “is a terrible idea” that “curbs freedom and won’t work”. EU spokesperson Ryan Heath said that the new tax “is part of a troubling pattern of behaviour and laws from the Hungarian governments, and more than that it is bad news for the internet which is a global common resource.” Any unilateral action taken by a member state without coordination increases the gap among EU countries and ultimately weaken the position of Europe in the digital world in terms of freedom, human rights, and competitiveness.

In addition, EC considers the Internet tax to be a wrong measure also from a practical and economic point of view. In fact, Internet traffic grows globally at a rate which is out of the control of any single country, so that the effects of a levy applied to data traffic would be very hard to predict even in the short term and the tax rate would require continuous adjustments in order not to become unaffordable. At the moment the Hungarian government has proposed a cap on the tax, a monthly amount of 2 €/enduser/month and 20 €/coorporate user/month, with an expected yearly revenue of about €100 million. Interestingly, with this measure Hungary goes against its own digital strategy, which prohibits any kind of taxation of internet traffic.

It is unclear if there were acts of violence during protests, but the overwhelming crowd has implemented a peaceful and striking protest showing the bright screens of their smartphones. Protests are still going on in Hungary and in many other countries in solidarity, while a new rally has been launched in Hungary for Sunday Nov 02. Hungarian Parliament has reacted to EC position saying, according to Hungarian online daily, that if the European Union wants to dictate to Hungary, then the country should consider slowly backing out of the Union.